I couldn't find a Bell link at the time, but I finally ran across one. Quite a splash they have across their page. Starts with a teaser

that leads to a full page of info. I particularly liked their list of e-voting benefits

The electronic compilation devices used by Bell Business Solutions ensure efficiency, thoroughness and integrity throughout the voting process, whether for a municipal or school board election, referendum or any other consultation.

Let's see, so in summary: it's fast and there are fewer people. Ah. Efficiency! How we worship you! Our voting must now be PRODUCTIVE! Maybe we should eliminate humans from the voting process altogether, and let the machines objectively decide our fate.

Objective with no human involvement?
Um, so the machines programmed themselves did they?

What you mean is, some computer code written by humans you don't know, in the United States, not reviewed by any humans in Canada, will decide the results of the election according to their programmed whims, with no humans to verify the results.

They used the Accu-Vote ES, which is a mark-sense reader

The Accu-Vote ES system uses an optical reader to record votes on a memory card as ballots are being cast. It considerably simplifies the electoral process for everyone involved and guarantees that the final results will remain secret until the polls close.

In Québec, since 1995, more than 120 cities and municipalities have successfully used vote counting devices. More than 4 million ballots have been recorded by voters during these elections.

The Accu-Vote is made by everyone's favorite reliable, trust-worthy electronic voting machine company: Diebold. Here's a look at their Accu-Vote OS scanner.

Err, simpler than humans marking an X on paper and then humans counting it?

Who said elections were complicated?
How about elections maintained completely trustworthy and accurate? 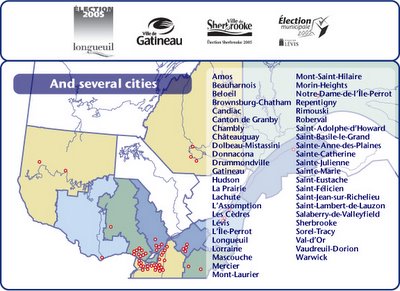 Comments:
The 2005 election in Chambly (Quebec) showed us how objective the Accuvotes are. The defeated (by only 5 votes) candidate asked for a judicial recount, because of too many rejected votes (3,14%). The "human involvement" (i.e. hand recount) then reversed the election outcome.

The Diebold Election Systems Election Manual For Staff predicts it :
« Ideally, a recount yields exactly the same results as the initial count. However, in the case of AccuVote- OS ballots, this is qualified by the following considerations. These considerations become increasingly relevant over larger quantities of ballots.»

Did you notice that the "Diebold" brand name is never mentionned anywhere ? Always only "Accuvote"...

were these machines tested ? They are too flexible to be tested against any standard. Every election, a part of the embedded software is generated and written to the memory card. Therefore, the behaviour can be different every time. Among other tasks, this generated part prints the results...
Harri Hursti used this "feature" to hack them twice (without having to open the machines' case) : in May 2005
and December 2005.

do they lease them from the US? This question is relevant since the 2005 election differed from previous years. Almost whole Quebec voted the same day, instead of a part of the cities every year. But why from the US ? Other Canadian provinces use Accuvotes. This list of towns might not be comprehensive : it lists only some cities in Quebec (because most of the cities don't own the machines ?).